There are an unknown number of injuries, according to the Liberty County Sheriff’s Office. It is unknown what caused the derailment. The NTSB is investigating.

CHESTER, Montana — At least three people have died after an Amtrak train bound for Seattle and Portland derailed near Joplin, Montana, according to the Liberty County Sheriff’s Office (LCSO).

There are an unknown number of injuries. Six different counties in Montana are accepting transported patients, according to LCSO.

It’s unknown at this time what caused the derailment. All passengers have been evacuated from the train.

“We are deeply saddened to learn local authorities are now confirming that three people have lost their lives as a result of this accident,” an Amtrak spokesperson said.

Eight of the ten cars on the train derailed around 3 p.m. PST Saturday. There were around 141 passengers and 16 crew members on board, according to Amtrak.

The National Transportation Safety Board announced they were deploying a go-team to investigate the derailment. Amtrak has a team on the ground to help support the investigation.

Amtrak is sending an Incident Response Team, emergency personnel and Amtrak leadership to “help support our passengers, our employees and their families,” according to a spokesperson.

Pictures on social media show multiple cars derailed from the tracks. Passengers can be seen standing in clusters outside the train. One staging area for the wounded was set up at a high school in Chester, Montana.

The train, an Amtrak Empire Builder 7/27, travels between Chicago and Seattle, and also makes stops in St. Paul, Spokane and Portland.

Individuals with questions about their friends and family aboard the train should call 800-523-9101.

There will be no trains running between Seattle and Minneapolis on the Empire Builder route, according to the company.

Amtrak customers can contact the company at 800-872-7245 to obtain additional information about the status of services.

The Empire Builder 7 we were traveling west on to Seattle derailed near Joplin, MT about an hour ago. pic.twitter.com/k4TjbRog3D 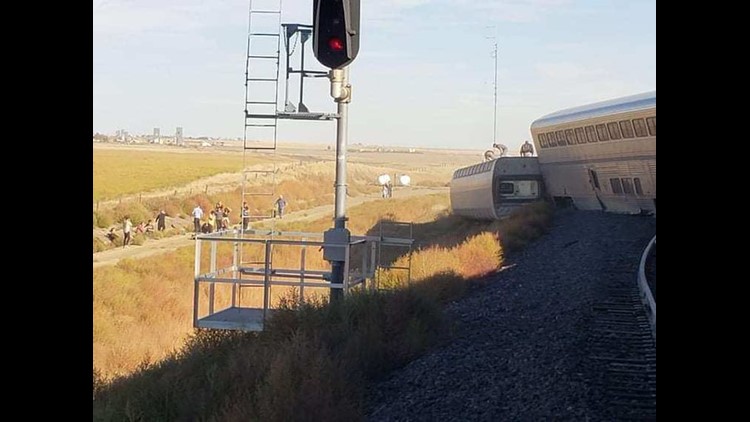 Clearing, windy & much cooler for Thanksgiving